Is Your Next Character Sitting Next to You at Work? 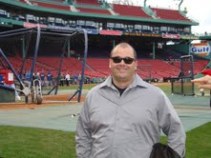 It’s perhaps a sad commentary on our culture that the written word seems to have less and less value. As such, many of us have “real” jobs and write when we can. But for me, it was that “real” job that proved the inspiration to finally write my first novel.

I was a professional writer for many years at The Wall Street Journal and always felt I had a novel in me (no Christopher Hitchens quotes, please). I also always knew that if I wrote a novel, it would be some sort of political thriller. I had been in the military, had written about defense/NATO/Bosnia/Iraq-Iran for the Journal, and I’m not the kind of guy who was gonna write the male equivalent of “Eat, Pray, Love.”

For the past 10 years I have been a firefighter/paramedic. It’s been a great second career and day-to-day more satisfying for me than journalism. I wished I’d discovered firefighting when I was 25 instead of 40.

As my novel continued to rattle around in my head, I looked around at the genre — Clancy, Le Carre et. al — and realized that thriller heroes had run the gamut from gumshoes to spies to soldiers. But there had never been a thriller where the hero/protagonist was a firefighter. That’s how Nick Mattera was born.

He is the main character in my new novel, “Soft Target,” the first in a four-book series I have planned. In “Soft Target,” two al Qaeda operatives, Abdullah and Jhalil, get tired of dodging drones in Afghanistan and come to the North Shore of Chicago to open up a new front in the War on Terror. Until, of course, they run into Nick Mattera.

And while I found Nick Mattera at my job, I honed the plotline for “Soft Target” by simply reading the papers. Ripped from the headlines, as Dick Wolf would say, Abdullah and Jhalil are what Western intelligence agencies are now calling “Nike Terrorists.” Instead of planning the next 9/11, al Qaeda and other radical Islamic groups are encouraging followers to “Just Do It,” hence the name “Nike Terrorist.” Instead of figuring out how to steal an airplane and crash it into the nearest tall building, Abdullah and Jhalil plan smaller missions that only require readily available weapons and simple explosives that can be found at most construction companies (hint, hint).

But as “Soft Target” builds an audience, it’s clear to me that the real-life aspect of the book that most readers are interested in and enjoying is my experiences as a firefighter. Indeed, if I take a bow for any part of “Soft Target,” it’s how I have written about life in the firehouse. Like most of the characters in the book, the firefighters are not one-dimensional. They’re not the “every one is a hero” caricature that seems to fit with the national narrative on firefighters. Even Nick Mattera has flaws, because that’s real life.

In Highwood Station 37, which is both my real firehouse and the fictional setting for “Soft Target,” there are definitely stereotypical firefighter/hero types, but there are also firefighters who are selfish, manipulative, lazy, stupid, gay, straight, honest, liars, big, small, fat and ready for the buff-boy calendar. In other words, they’re real people. And, yes, all the guys in my firehouse are trying to figure out which character is based on them. The truth is, they’re amalgams of firefighters I’ve known over the years. But more to the point, they’re not people I created because I’m such a great writer, but people I’ve run into outside my life as a writer.

The same is true for some of the fire and EMS calls I write about in “Soft Target.” Some of them are almost word-for-word real-life fire calls that I have been on over my career. Others are calls that I’ve read about, heard other firefighters talk about, etc. etc.

The point of all this, I guess, is that, yes, as writers we’re creative people. And many of the plot lines, twists, turns and characters that we develop are manufactured out of whole cloth. They are a direct result of our creative talents. But for me, someone who had struggled writing his first novel, the perfect characters weren’t in my imagination, but staring me in the face every day at my job outside of writing. Maybe the lead character for your first — or fifth — novel is somewhere in your life, just waiting to be put on the page.

10 Day Book Club introduces guest bloggers. We encourage people to share their love of writing. Send your submission to guestblog@10daybookclub.com and include your contact information within the content. All submissions must be written by the author.

10 Day Book Club is a virtual tool, which prepares manuscripts for publishing. The one-of-a-kind venue is simple for writers to use. Learn more at http://10daybookclub.com

All writing shared in our guest blog is the opinion and message of the author and is not the opinion of 10 Day Book Club, LLC.

3 Responses to Is Your Next Character Sitting Next to You at Work?